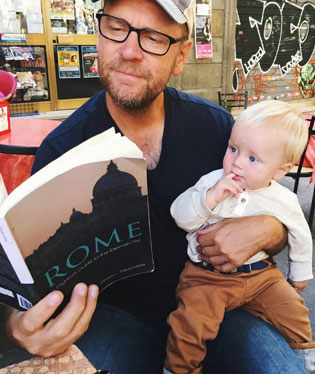 Born and bred in a windy city out in the mid-west, Steve came to Gordon in 2001. Focusing on the New Testament, he specializes in literary analysis of the Gospel of John and socio-rhetorical approaches to the letters of Paul. He especially enjoys the “intertextual echoes” embedded in all of these texts.

Together with his colleagues, Prof. D. Francois Tolmie (University of the Free State, South Africa) and Prof. Ruben Zimmermann (Johannes Gutenberg University, Germany), Steve recently completed a major volume entitled: Character Studies in the Fourth Gospel: Narrative Approaches to Seventy Figures in John (Tübingen: Mohr Siebeck; reprinted Grand Rapids: Wm. B. Eerdmans). The work—an example of cross-cultural, intercontinental, team exegesis—represents the most thorough study of characters and characterization in the Fourth Gospel ever published. Previously, his technical study, Rewriting the Feeding of Five Thousand: John 6.1-15 as a Test Case for Johannine Dependence on the Synoptic Gospels, was published by Peter Lang for their series Studies in Biblical Literature. Steve also edited and contributed to a collection of essays honoring his colleague Marv Wilson, entitled, Perspectives on Our Father Abraham (Grand Rapids: William B. Eerdmans).

Steve is currently working on several new projects, including a new online course related to the entire New Testament, as well as another course based on Paul’s letter to the Romans, a course he will teach, much to his delight, in and around Rome (the father-son photo above was taken while at a cafe in the shadow of Basilica di Santa Marie Maggiore). He really enjoys working closely with his student research assistants, and some of this work has led to recent publications co-authored by students Chelsea Revell (class of 2013), Joel Nolette (class of 2011), and Jordan Montgomery (class of 2010). A long-standing member of the Society of Biblical Literature, he attends national and regional meetings each year, taking students along whenever possible.

Outside the college, he enjoys all things outdoors, especially camping in the nearby White Mountains and boating on Lake Winnipesaukee with his wife and kids. He also loves to travel, and having recently spent a sabbatical doing research in Italy, he really wants to go to Greece and/or Turkey next. Interested sponsors of this journey are invited to contact Dr. Hunt directly!