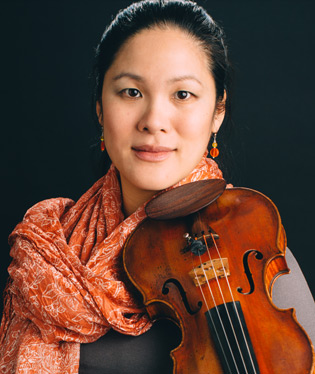 Sarita Kwok has distinguished herself as one of the most captivating and sophisticated performers to emerge from the ranks of Australia’s classical musicians. She has been enthralling audiences across the globe since she debuted with the Sydney Symphony at the age of fifteen and was named Symphony Australia Young Performer of the Year (Strings) shortly after.

Born in Australia to Chinese parents, and raised in both Australia and Singapore, Sarita’s musical career has been similarly cosmopolitan. She has performed as a solo artist, recitalist, and chamber musician throughout Europe, Asia, and North America, and as a featured soloist with the major orchestras of her native Australia. She has also been a prize-winner at the Kloster Schöntal (Germany), Gisborne (New Zealand), Lipinski/Wieniawski (Poland) international competitions, and grand prize winner of the Plowman National Chamber Music Competition.

An enthusiastic and committed chamber musician, Sarita was the founding first violinist of the Alianza Quartet, the former graduate quartet-in-residence at Yale University, whose “unusually elegant sound” was praised by The New York Times. Sarita is a founding member of the Arabella String Quartet (2012), an ensemble quickly establishing a reputation for its remarkable artistry. Their recently released recording with Naxos (May 2017) "In the Moment" was named Album of the Week by ClassicFM and was praised by The Strad magazine as “an artfully balanced mix of rarities … this is a fine disc, the Arabella digging deep to produce performances of great intensity and poise”. Sarita and pianist Wei-Yi Yang's recording ‘Interchange: Violin and Piano Duos of the C20th' was released by Genuin Records in 2016. The German periodical Deutschlandfunk remarks that “seldom is a recording so electrifying … [Kwok and Yang] manage to make each work sound unique and yet make it recognizable as part of the same era”.

Sarita is a persuasive advocate of contemporary music. She has debuted works by composers Jerome Combier, Jean Giroud, and John B. Hedges, among others, and has collaborated extensively with Martin Bresnick and Ezra Laderman. With the Alianza Quartet she recorded Laderman’s last three string quartets for Albany Records to critical acclaim. Her recent recording of Martin Bresnick’s Josephine the Singer for solo violin was described by Gramophone as “gorgeously executed”.

Sarita Kwok’s passion for performing is matched only by her commitment to education, and her analytic yet sensitive approach has made her a highly sought after teacher. The former director of the undergraduate lessons program at Yale, Sarita served for eight years on the faculty of the Yale Department of Music. She is currently Professor of Music and Chair of the Department of Music at Gordon College in Wenham, Massachusetts where she is also the inaugural holder of the Adams Endowed Chair in Music. She has additionally taught master classes at Wellesley and Amherst colleges and at the New Zealand School of Music, among others. Sarita holds both Doctor and Master of Musical Arts degrees from the Yale School of Music, where she was a student of Syoko Aki and the Tokyo String Quartet. She performs on a violin from 1736 by Italian maker Johannes Florenus Guidantus.