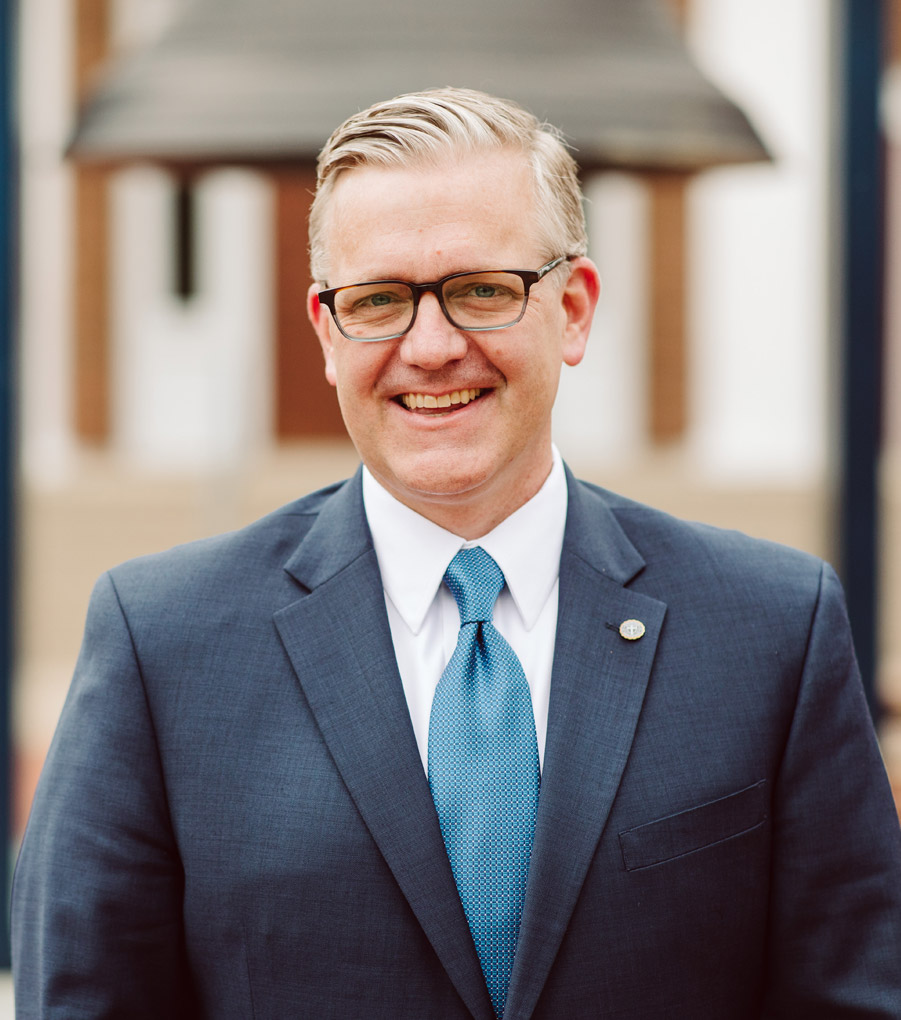 “The Christian college has a responsibility to bring leaders into the church and the world, equipped to engage with the great challenges of the day, unapologetic about the role of faith in public life and an array of vocational pursuits.”

An accomplished scholar and proven leader with 25 years’ experience in Christian higher education, President Mike Hammond distinguishes himself with a rare combination of academic credibility, an effective and collaborative leadership style, deep spiritual character and maturity, a heart for students, and a passion of Christian higher education. He became Gordon's ninth president in July of 2021 after having served in both academic and executive positions at several institutions of higher education, including the University of Arkansas, Southeastern University and Taylor University. He holds a bachelor’s in Christian education, with a sociology minor, from Taylor University; a master’s in biblical and theological studies, with a focus on religion in American life, from Wheaton College Graduate School; and a Ph.D. in History from the University of Arkansas.

Most recently at Taylor University, Hammond was provost and executive vice president, a position he moved into from his previous roles as academic dean for the School of Humanities, Arts, and Biblical Studies and professor of history. As the second-in-command at Taylor, Hammond assumed leadership for the University’s full academic program and all facets of operations during a yearlong presidential transition. He previously served as director of leadership development and associate director of admissions at Taylor. A collaborative, irenic leader Hammond established a reputation for being innovative, working through contentious situations and solving difficult problems.

Throughout his 25-year career in higher education, Hammond has often sat on the “academic side of the house” but with bridge to administrative matters, which fostered in him a desire both to shape the students and to shape the institution. Prior to returning to his alma mater, Hammond was a history professor at Southeastern University in Florida. He quickly moved into the role of chair of the Department of Historical, Legal, & Leadership Studies in the College of Business, was elected faculty moderator, and served as a faculty guest on all Cabinet and Trustee meetings. At Southeastern, he launched two new majors, four new minors and two graduate degree concentrations.

A widely published scholar, Hammond’s major research field is American Christianity, including the evangelical movement, the Civil Rights movement and the intersection of race and religion in 20th century United States history. As a doctoral academy fellow at the University of Arkansas, he worked with Dr. David Chappell as a research assistant for Chappell’s book Waking from the Dream: The Battle for Martin Luther King’s Legacy (2014). At Wheaton College, Hammond studied under renowned historian Dr. Mark Noll, from whom Hammond has drawn inspiration for his career in higher education. Hammond has been recognized with awards for excellence and achievement in teaching and research.

A native of Indiana, Hammond is an avid baseball fan and runner. He and his wife, Jennifer, have five daughters and one son ranging in age from 14 to 21.