Perfectly positioned between Rome and Florence, in the heart of Umbria, the history of Orvieto as a site of significant geographic and cultural intersection, is utterly unique. Continuously occupied for at least two-and- a-half thousand years, Orvieto is a place deeply connected to the roots of its own history, tracing a lineage from Etruscan, Roman, Medieval, Renaissance, and Modern until the present day. The character of the city has been shaped by these periods as much as by the form it presents being a naturally defensible mesa of volcanic stone. The relationship between nature and urban design is marvelously articulated in Orvieto and expresses the continuity of tradition and change so evident in places defined by centuries of habitation and influence. 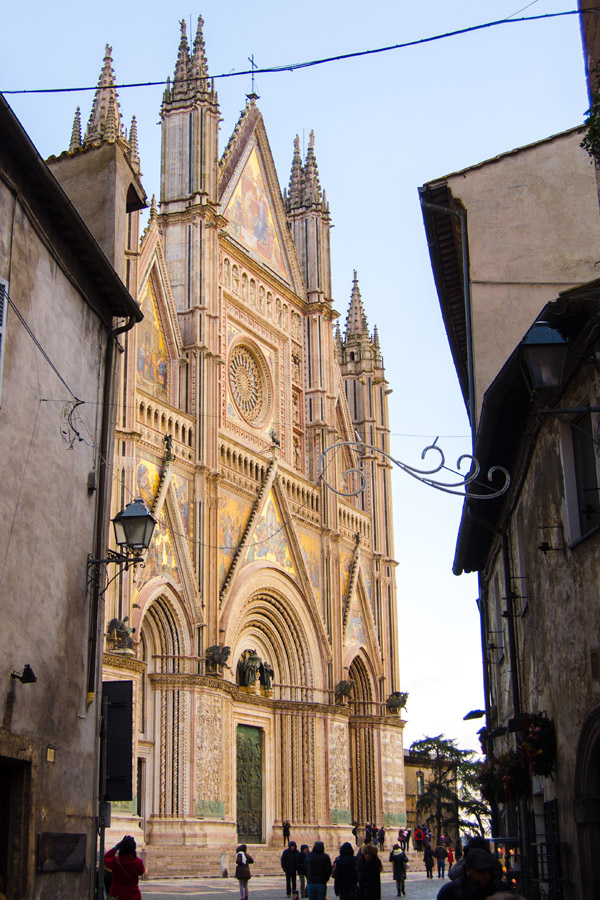 At the very heart of the city is the Duomo, the cathedral. It boldly defines the contour of the skyline and has represented the radiating center point of Orvieto’s identity since the high Middle Ages. As one of Italy’s most magnificent Gothic Cathedrals, it is an example of the kind of profound collaborative works of art only possible through a shared will and civic pride that could last generations until its completion. As with similar works of the period, it was meant to represent the meeting point between earth and heaven using every available material to demonstrate the substance and skill of its citizenry.

We chose to locate the Program in Orvieto for many important reasons. One of those reasons was to permit young people to participate in an integrated learning community in order to engage with art, history and the local culture, in a living context. To study out in the open and to build up new tools for learning that have everything to do with a dialogue, with a relationship to the past that avoids nostalgia. True, Orvieto has been home to various popes, artists, theologians and more. However, every city has an identity that it displays and one that is less visible but no less vital in telling its story.

We believe that to be in a place means to take it seriously and thus make the effort necessary to read beyond the initial passages, the first images of the narrative and attempt to listen with greater attention than usual.

While each period of history contends with the facts, structures and environments that have been entrusted to it, it is no exaggeration to suggest that beautiful towns, such as Orvieto, are simultaneously esteemed and endangered by this same inheritance. They are cities that house our human histories, our social and artistic evolutions but they are, they must-be, living and embodied for a purposeful present. Otherwise, in a fragile economic landscape, they risk fading into museum status as the only predictable means of survival. The vibrant traditions, at that stage, would become mere display and lack the theatrical poignancy of real symbols, gestures and generationally shared meaning.

As guest residents in Orvieto, with intentional gestures of solidarity, we hope to participate in the unfolding history of this place.