Location in the Balkans 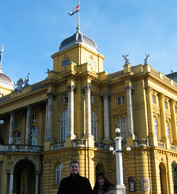 For the first two months, students will live in Zagreb, the capital of Croatia. The city has a vibrant and inviting intellectual and artistic culture, with many seasonal festivals, theaters, music clubs, museums and libraries. It is a city in which walking, biking or taking a tram is a preferred form of transportation, the open market is a preferred way of shopping, and sitting in the outdoor cafes is a favorite pastime. Students have found that Zagreb is a city in which one quickly feels at home.

Founded in 1094, Zagreb has a long history at the margins of Europe. Its architecture betrays its past as a Central European city under the rule of the Habsburgs. Its buildings show all the trends of 18th, 19th and 20th-century European architecture—with its Neo-Gothic cathedral, its Neo-Baroque National theatre and a string of parks and promenades laced with cafes.

Zagreb will serve as a home base from which we will take day and weekend trips to areas that were ravaged by and are still recovering from the war, like Osijek, Vukovar and Slunj. 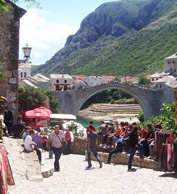 Early in the third month we will leave Zagreb for a 10-day sojourn through the Balkans. This will include extended stays in Belgrade (the capital of Serbia), Mitrovica (a city at the heart of the struggle between Serbia and the Republic of Kosovo), Pristina (the capital of Kosovo), Sarajevo (the capital of Bosnia and Herzegovina that endured 4 year siege that resulted in 15,000 dead civilians), and Mostar (a city in Herzegovina, divided between Croats and Moslems and struggling to find a lasting peaceful solution). 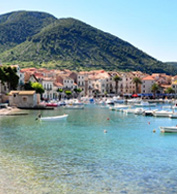 Our journey will conclude on the island of Vis in the town of Komiza. An island in the Adriatic Sea off the coast of Croatia, Vis is surrounded by crystal blue water, and peppered with inviting beaches and ancient stone villages. The island serves as an ideal location for studying and reflecting, and for enjoying the Mediterranean side of the Balkans. In addition to its beauty, Vis is also strategically important. Since before the time of its Greek inhabitants, it was considered a gateway to the Adriatic Sea. Throughout western history, important ship battles took place there and various militaries vied for control of the island. More recently, from 1945-1991, the island was closed to visitors while it served as a key naval base for the Yugoslav National Army.

The Balkans represent a unique crossroads of cultures, peoples, histories and religions where scholars and students in the War and Peace Semester may avail of extraordinary resources to explore the origins and aspirations of the whole European project.

The history of this region dating from Greek and Roman antiquity—evident in the beautiful classical architecture of cities like Split and Dubrovnik—through the dramatic encounter between Christian and Muslim civilizations in the battle of Kosovo right up to the outbreak of WWI in Sarajevo and the more recent international conflicts in Bosnia and neighboring nations is a showcase for the study of conflict resolution. There are few places in Europe (perhaps the world) today, where questions of profound cultural, political and religious division are so emphatically dramatized and where visions of deep reconciliation are more urgently called for. The Balkans are a cradle of war and peace. Where the wound is, the remedy grows.