Have you wondered how the church got to be the way it is? Do you want to be able to articulate your own faith heritage and why it is important to the world? The early Christianity minor is designed for people who want to understand their spiritual ancestry and its impact on their lives. Added to any major, it will prepare you to help the church respond to modern-day issues.

Why study early Christianity at Gordon?

At Gordon, early Christianity is more than just something you study—it’s a spiritual resource for your life. By examining how the church spoke into the past, you will better engage with church and culture today. Studying early Christianity at a Christian liberal arts college gives you the support to delve deeply into interdisciplinary exploration of church history, while also focusing on the personal, spiritual ramifications of what you are learning.

Pursue early Christianity as a concentration in the history major, or as a minor alongside a different major.

What careers can I pursue with early Christianity?

Understanding the history and traditions of the church will help you engage as a thoughtful Christian. Many students go on to graduate work in history, theology, religious studies, philosophy and seminary, and pursue a variety of careers, including: 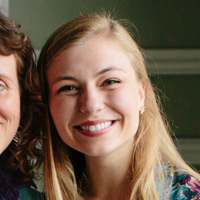 “From late night edits to coffee shop brainstorming, [Dr. Hevelone-Harper’s] support was unwavering and sincere. I’m thankful for the hard work that my professors at Gordon College have put into me over the last four years and I look forward to continuing my education abroad after I graduate.”
Hear from others ➔

As a student of early Christianity, you’ll study a relevant ancient language for two semesters. In addition to offering coursework in Koine Greek and in Latin, Gordon is one of just a handful of colleges that offer undergraduate coursework in Syriac, another important language for reading ancient texts and understanding the worldview of early Christians. Gordon's Jerusalem and Athens Forum offers an opportunity to study great historical texts alongside students of all majors.

Early Christianity students are encouraged to spend a semester studying in the places that most interest them, from D.C. to the Middle East. Each off-campus program offers a different perspective and focus.