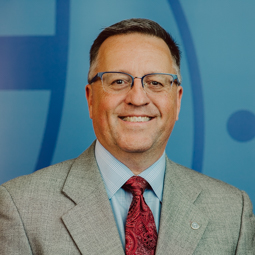 Rick Sweeney, who served as the first director of communications at Gordon College in the 90s, returned to the College in November 2010 in what was then a newly created role as vice president for marketing and strategic communications. Currently his primary role, along with his College Creative team, includes overseeing college-wide integrated brand marketing strategies for Gordon’s nationally recognized student programs, academic disciplines and institutional distinctions, and managing the College’s reputation and positive relations with external community, civic and member organizations such as AICUM (Association of Independent Colleges and Universities in Massachusetts).  He also serves as the Cabinet officer overseeing Gordon Athletics, home of “The Fighting Scots.”

Sweeney has more than 25 years of experience managing award-winning marketing and communications programs in higher education, after previously working in corporate communications at Liberty Mutual. After serving as Gordon’s first director of communications from 1995 to 2001, he worked at Cornell University as the director of marketing for the Johnson Graduate School of Management. Before returning to Gordon he was executive director of advancement communications and marketing at Boston College and worked as an independent marketing and communications consultant. Sweeney has led branding and strategic marketing initiatives in print, media and online; his video projects at Cornell earned a gold Davey Award in 2007 and a Telly Award in 2004.  At Gordon, Sweeney and his team garnered a number of awards for creative marketing work, most recently a 2016 Gold Communicator Award for Gordon’s “Giving Tuesday” campaign from Academy of Interactive and Visual Arts (AIVA), and a 2017 W3 Silver Award for website design.

Sweeney holds a B.A. in English from Gordon and an M.S. in mass communication from Boston University.