About the Series
Robert Herrmann
Articles and Press Releases
Home

Dr. Herrmann was a former adjunct professor in chemistry at Gordon College who taught biochemistry for twenty-two years; first at Boston University and later at Oral Roberts University. He joined Gordon after relocating to Massachusetts from ORU in 1981 and directed Gordon’s premedical program for nearly ten years. In 1981, he had left full-time medical education to become executive director of the American Scientific Affiliation, a 2,200-member society representing an international network of Christians in the sciences There he met member Sir John Templeton, with whom he collaborated in writing several books, including The God Who Would Be Known and Is God the Only Reality? In 1998 he wrote Sir John’s biography and a revised edition in 2004. Dr. Herrmann is a founding member of the John Templeton Foundation and had served on the Board of Trustees at Barrington College.

Throughout his career Dr. Herrmann sought to address “the Big Questions” associated with a sophisticated understanding of the relationship between faith and science and helped build Gordon’s reputation as an institution willing and able to navigate that intersection. In 2012, the John Templeton Foundation partnered with Gordon to establish the Herrmann Lectures, which are held annually on campus. 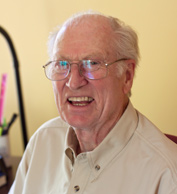