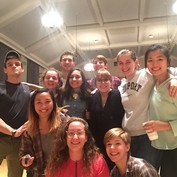 Catacombs is a weekly student-led worship opportunity for Gordon students. Most Sunday nights during the academic year, students gather in the A. J. Gordon Memorial Chapel at 9 PM for an informal time of worship, prayer, and reflection. The sanctuary is low lit as students enter in silence, creating a reverent environment that is free from distraction.

The name of the service reflects back to the underground burial sites of early Christians. Catacombs are ancient underground cemeteries, used by Christians and Jews in the late Roman Empire. During extreme times of persecution, Christians may have fled to the catacombs for safety while celebrating the Eucharist, but the Catacombs were not generally a place for Christians to hide. Rather, the catacombs served as a place for Christians to honor the martyrs that had gone before them and to remind themselves of the promise of the resurrection so that they would be equipped to live out their faith in their families and in an often hostile society.

In the same way, Gordon's Catacombs worship gathering seeks to provide the community with an opportunity to worship God together not so that we can hide in the dark, but so that we can leave equipped to be witnesses for Christ in all that we do throughout the rest of the week.