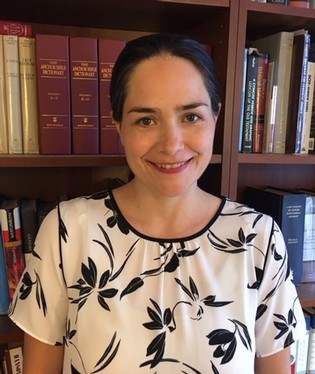 Joanna Greenlee Kline grew up in the beautiful state of Minnesota and majored in Biblical Studies and English at Gordon College as an undergraduate. After college she spent two years teaching English in Russia and traveling throughout Russia, Eastern Europe, and Turkey. Joanna went on to receive an MDiv from Harvard Divinity School and a PhD in Hebrew Bible from Harvard University’s Committee on the Study of Religion. During her time in graduate school she studied in Germany and Israel, taught several classes at Harvard, and worked at a homeless shelter for men in Cambridge.

Joanna loves studying the Old Testament and is especially interested in the ways in which different parts of this collection of books fit together to tell a cohesive story. Her research interests include narrative in the Old Testament, biblical wisdom literature, and early Jewish and Christian biblical interpretation. Her forthcoming book, Intimations of Jacob, Judah, and Joseph in the Stories of King David: The Use of Narrative Analogy in 1 Samuel 16–1 Kings 2 (Mohr Siebeck), explores parallels between the books of Genesis and Samuel. Joanna recently contributed an essay entitled “Agur’s Prayer (Proverbs 30:7–9): An Everyday Response to Extraordinary Revelation” to a collected volume on the theology of prayer in the Old Testament.

Joanna lives in Beverly and enjoys hanging out with her husband Jonathan and their three daughters.