Roddy Ngolomingi ’22 has found a formational, international community that extends from the Democratic Republic of the Congo, Africa, to Wenham, MA.

Born in Kinshasa, D.R.C., Roddy had prayed about attending college and finding a group of people in the United States who would pray for him and support him. He knew that if he wanted to attend college, he would need to work his way through each year. While on a powerful prayer journey, Roddy was connected to Gordon College. “Someone from my church introduced me to Gordon, and from there I met with Executive Vice President Dan Tymann. I fell in love with the college before I even set foot here. When I was accepted, I knew right away it was God’s plan for me to be here.”

In the winter of his first year, during the spring training season for fall athletic teams, Roddy was invited to train with the Gordon College Men’s Soccer team. While meeting with the team for daily practices, weekly workouts at the Bennett Center and devotional meetings throughout the week, he knew it was the Christ-centered community he was praying for. This was confirmed when Roddy was officially offered a position on the team for the upcoming season.

“This has been the biggest blessing I have received so far,” Roddy says. “It feels like I am a part of a family. It has been so encouraging and formational to consistently hear our coach talk about glorifying God, even when we are playing soccer!”

Roddy has found a supportive community through the Men’s Soccer team, and he believes the lessons he has learned—trusting God when things get hard, having grit in the face of challenges and pursuing worship and humility above all things—will continue to form his character and his life far beyond the soccer field. “This team has changed my life.”

Thank you for supporting our student-athletes as they learn and grow—physically, relationally and academically—during their Gordon College experience. 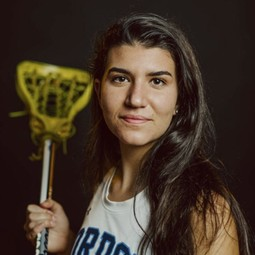 Between the spring of 2018 and 2019, Women’s Lacrosse faced its lowest team numbers in many years, resulting in two difficult seasons of hard losses. Brenna Peterson ’20 remembers, “There were a couple of games we had zero substitutes, and one of our goalies had to play the field. Those years taught us to adapt to unexpected situations.” As team captain, Brenna has celebrated the unity of her team as they have become stronger because of these challenges.

Not only has the team bounced back from a few hard seasons, together they faced the transition of welcoming new coaching staff for the 2019-2020 season. As this is Brenna’s last year, she was unsure of how new coaches would affect the team unity. But students were welcomed into the hiring process, and the chosen coaches, Coach Max, Coach Al and MC Aston, have brought a new energy to the team.

One of the greatest unifying experiences for the WLAX team is the spring break training trip, in which Coach Max sees even greater potential. Brenna shares, “It’s the prime time in the season for solidifying team unity because we’ve already started to form a team identity and we can further strengthen it by being together for an extended amount of time.” The team trains hard but they also volunteer for various nonprofits in the city they visit. In the past, these have included the Salvation Army, Habitat for Humanity and Lax4Life.

The generosity of donors is what helps the team attend spring training, as the entire trip is fundraised. “The time we get during spring break brings us closer together, which gives us even more reason to enjoy being on the team and to play hard for each other.” These trips set the team up for success, as they learn how to celebrate each other’s strengths and lean into weaknesses.

Coach Max prays for several advancements for the team: that within the next few seasons no team member will need to pay for spring break training; that a program will be developed in which senior players receive a new stick unbeaten by years of training, as a symbol of growth and strength; and that the team could fundraise more for organizations like Lax4Life.

Your generosity changes the lives of our student-athletes, and we are so grateful for your continued support.