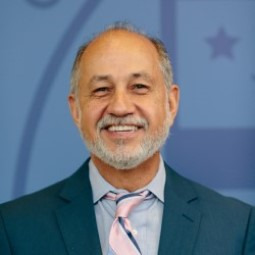 Roberto Miranda graduated from Princeton University with a B.A. in international affairs (1978) and upon his graduation was awarded the Harold Willis Dodd Achievement Prize. He continued his higher education at Harvard University, where he earned an M.A. and a Ph.D. (honors 1989) in romance languages and Latin American literature. While studying at Harvard, Roberto was employed as a teaching fellow in the Spanish Department and upon his graduation was awarded the Modern Languages Travel Prize for the Best Teacher among Teaching Fellows in the Modern Languages Department. In 2013, he received an honorary Doctor of Divinity degree from Gordon-Conwell Theological Seminary.

Following his graduation, Roberto entered the ministry and currently serves as the senior pastor at Congregación León de Judá in Boston, Massachusetts. In addition to leading his congregation, he has also served on various boards and in 2001 founded the Fellowship of Hispanic Pastors of New England (COPAHNI), where he has served as president in the past.