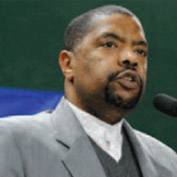 David Wright serves as the Executive Director for the Black Ministerial Alliance of Greater Boston, Inc. Since 2013 he has also taken on the role of Interim Executive Director of the Boston Ten Point Coalition. Both of these faith-based, nonprofit organizations utilize collaborations among churches, community-based organizations, government agencies and elected officials to marshal resources to address priority needs in Boston’s most challenged neighborhoods.

After law school, Rev. Wright served as a law clerk for the Honorable David S. Nelson, Justice of the United States District Court for the District of Massachusetts. Thereafter, he worked as a litigation associate at Brown Rudnick Freed & Gesmer and, later, Hanify & King.

He currently serves as the Assistant to the Pastor at Peoples Baptist Church in Boston where his duties include young adult ministry, children’s choir, and leading a team that is piloting an innovative outreach ministry called the Saturday Praise Assembly.