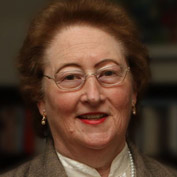 Dr. Dorothy F. Chappell, former Dean of Natural and Social Sciences and Professor of Biology, at Wheaton College (IL), has served as Academic Dean at Gordon College (MA) while serving on the Board of Trustees at Wheaton College. Her scholarship has addressed cell biology of algae and topics where Christianity and science converge.

Among several academic and professional honors she has received are the Outstanding Teacher of the Year Award at Wheaton College, Outstanding Educator of the Chicago Region, Fulbright Scholar’s Research Award  to conduct research in New Zealand, Australia and Fiji, and in 2012, Christianity Today cited her as one of 50 Women You Should Know. Dr. Chappell committed to serving in Christian higher education early in her career and also has served in numerous other leadership roles including on boards of trustees and boards of advisors for several organizations, including the AAAS DOSER Perceptions Project Advisory Board, among others.  She has served as the President of the American Scientific Affiliation and is an Elder in the PCUSA (Presbyterian Church USA) where she has taught Adult Sunday School classes on theological and other issues relating to science and ethics. The book, Not Just Science, co-authored by Dr. Chappell, was cited as a “2006 Book of Distinction” by the John Templeton Press and was featured as the “Book of the Month” by the American Scientific Affiliation in 2006.

Dr. Chappell holds degrees from Longwood College, the University of Virginia, and Miami University of Ohio.  A native Virginian and lover of the outdoors, she enjoys music, hiking, photography, travel, music and reading in her leisure time.