On March 2, 2013, Professor of Mathematics Mike Veatch brought scores of practitioners and interested students to campus for a conference on the logistics of humanitarian relief.   Partnering with the MIT Humanitarian Response Lab, speakers from NGOs such as Doctors without Borders and the Salvation Army presented on a wide variety of related topics.  Pike Scholar Anna Jonker '13 also presented on her senior capstone project analyzing a potential high-calorie supplement for such situations.

Sometimes projects are a long time in brewing.  Associate Professor of Mathematics Karl-Dieter Crisman recently has been involved with two grants on topics of personal interest, both of which should have impact on students and the broader community. For the 2013-14 school year, Dr. Crisman was named one of the inaugural Faculty Fellows of Gordon's Center for Faith and Inquiry.  His project, The Moral Case for Open-Source Software, brings together strands of thought on effective teaching using free resources, student participation in software development, and Christian commitments to promoting creativity and stewardship.  The goal of the grant is to bring some of the theological ideas underlying open-source software to a wider audience, including the pastorate. In 2012, Dr. Crisman was asked to join Project MOSAIC, an NSF-funded program to find new ways to introduce computation and modeling early in the college mathematics curriculum.  The goal is to make it easier to introduce more realistic modeling of real-life data for students as they are introduced to math concepts, as opposed to seeing things such as calculus divorced from this data.  Some of the work of the project can be seen at the website for the Math Association of America professional development workshop in the summer of 2013, held at the College of Idaho.

In 2012, Gordon people attended many conferences.  Here's just a sampling: 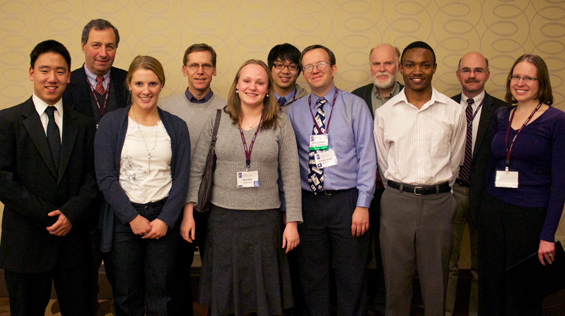 In January 2012, the world's largest meeting of mathematicians was in Boston at the Hynes Convention Center.  Naturally, Gordon students were there!  Some of the things we did: 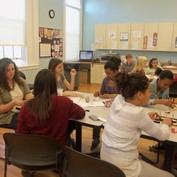 In April 2012, several Gordon students brought our tradition of Math Game Night to Girls, Inc. of Lynn.  These middle school girls got to have fun with math via a stand-up/sit-down binary counting game, making mathematical origami, and playing the Tower of Hanoi puzzle, to name just a few.  We hope to make this partnership ongoing between the department, Math Club, and Girls, Inc. in 2012-13.

Maya Bam didn’t expect to be able to attend the national conference in Operations Research without paying for it. But she was one of the first students to receive money from the Undergraduate Research and Grant Committee, which received $25,000 for this year from the Gordon College Student Association so that students like Maya could present their work.

Bam presented her talk, “A Flexible Server Shipbuilding System Using CONWIP Control,” in Charlotte. She chose this topic because of her interest in using math to operate complex systems. It was suggested by a professor at the University of Michigan who is doing a study for the U.S. Navy.

“It was really great,” said Bam, “It was really nice to get a glimpse at the professional world out there . . . I would love to see more Gordon students go and have the same experience I did.”

Junior Seminar on Vocation and Careers in Mathematics

These important questions are the focus of our new Junior Seminar in Mathematics.  Meeting during the second semester of your junior year, this course is designed to help you answer these and similar questions as you begin to focus on your life after graduation.

Senior Integrative Seminar in Mathematics and its History

An important part of Gordon's mission is to challenge students to consider how their faith interacts with their academic interests. In mathematics the intersection of faith and learning is perhaps best explored in the context of historical developments of specific topics and the nature of the discipline. This weekly course for seniors provides an opportunity to address such issues through a series of readings and seminar discussions.

On Saturday April 16th, 2011, four Gordon students attended the inaugural Salem State University Undergraduate Math Conference.  Presentations covered topics such as the use of classroom "clickers", math and music, and a talk about Sage by Gordon's Dr. Karl-Dieter Crisman.   Ideas for future collaboration were also shared over lunch.

The conference highlight was a tough-fought but friendly math match, with Gordon's team coming out ahead by one point!   One of the (easier) puzzles: In a standard 365-day year, is there guaranteed to be a Friday the 13th?

Thanks to Dr. Crow and SSU's Math Society for organizing it! 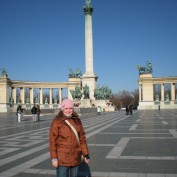 This spring (2011) junior Maya Bam is studying in Hungary with the Budapest Semesters in Mathematics program. Maya is the fourth student from Gordon to participate in the BSM program in recent years. 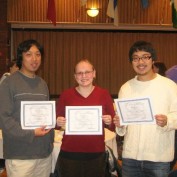 One of Gordon's three teams took second place in the math competition at the Fall Meeting of the Northeastern Section of the MAA. Maya Bam, Hang Yang, and We Ro Jung finished behind a team from Yale and ahead of one from Worcester State. We are very proud of them—and our two other Gordon teams who participated!