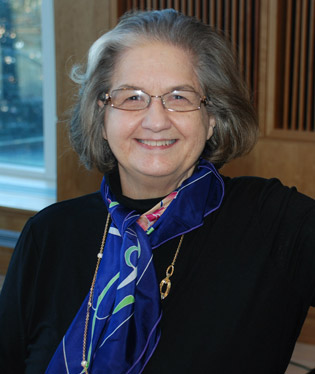 Faith Lueth has directed Women’s Choir at Gordon College since 1997. She holds the Artist Teacher Diploma from the Choral Music Experience Institute. She has taught choral music from elementary through college level. Mrs. Lueth has presented choral workshops for state, regional and national conferences of the National Association for Music Educators (NAfME) and state and regional conferences of the American Choral Directors Association (ACDA).

Her choral groups have performed for numerous state and regional conferences of NAfME and ACDA and have toured in the Czech Republic, Austria, Germany, England and Scotland. Her choral groups have been awarded the Gold Medal in several festival adjudications. In 2009 the Gordon College Women’s Choir was selected to perform for the Eastern Division conference of NAfME (formerly MENC).

Her awards for distinguished teaching include the TEC Superintendents Award and the Lowell Mason Award presented by the Massachusetts Music Educators Association (MMEA) for excellence and leadership in music education. In 2006 the MMEA honored Mrs. Lueth with its prestigious Distinguished Service Award for outstanding leadership and contributions to music education. She currently serves as MMEA's president, and previously served as recording secretary, high school representative, and higher education representative, and chaired MMEA conferences several times. She is the choral techniques editor for the Massachusetts Music News.

She has published several articles on the selection of repertoire, the adolescent voice, the development of choral tone, choral pedagogy, and critical and creative thinking and assessment in the choral rehearsal. Mrs. Lueth is listed in Who’s Who of American Women, Who’s Who Among Human Services Professionals, and Who’s Who in American Education. She has served as the ACDA’s Eastern Division Repertoire and Standards Chair for Middle School and is a past president of the organization's Massachusetts chapter.