In response to coronavirus (COVID-19) concerns, Gordon College will continue courses online through the remainder of the spring semester.  Learn more and stay updated ➔

Faith in the Halls of Power 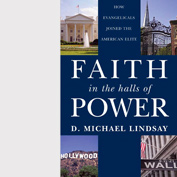 Faith in the Halls of Power offers an inside look at evangelical “elites” in American society. Drawing from hundreds of personal interviews with an broad array of prominent professionals representing the power centers of academe, business, entertainment and politics—including two former Presidents—D. Michael Lindsay offers a portrait of this growing cohort of leaders that is both intimate and insightful.

"The stereotype of evangelical Christians as uneducated, rural, and culturally marginal has been slow to break down. Yet evangelicals are prominent among political and economic power brokers, active in cultural production, and increasingly well represented among elite university students. Michael Lindsay does a large service by tracing the extent and pathways of this change. He shows an incorporation into the American ‘mainstream’ that is changing not only U.S. society at large but also the evangelical movement that has long seen itself as marginalized. That so many have been slow to see the pattern of change makes his book all the more welcome."

Review of Faith in the Halls of Power: