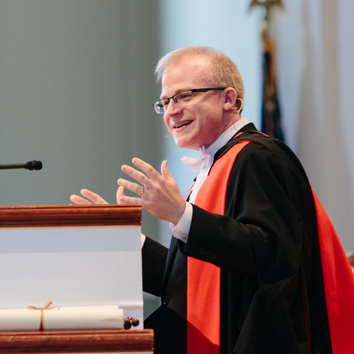 WILLIAM BARKER, M.Div., Ph.D.
Director of the Center for Faith and Inquiry

“I am passionate about the Christian liberal arts,” says the Rev. Dr. William D. Barker ’98, director of the Center for Faith and Inquiry (CFI) and the Gordon Honors Program. “Gordon College played an important role in fashioning that passion in my own life.”

Along with passion, Barker brings to the position an extensive depth and range of experiences—several of them international—as a scholar, teacher, pastor and entrepreneur in both the nonprofit and for-profit sectors. In all of these settings he has sought to be “an agent of change for sustained institutional growth.”

At Gordon, Barker double-majored in biblical and theological studies, and international affairs. He was an undergraduate teaching assistant in political science, and an archaeology research and teaching assistant for Jerusalem University College, one of Gordon’s global programs.

While still an undergraduate, he co-founded a privately held marketing firm for the brokerage industry. Among other achievements, the firm negotiated and successfully fulfilled contracts in the Greater Boston and North Shore areas.

After graduating from Gordon, he earned a Master of Divinity degree from Gordon-Conwell Theological Seminary in 2003. From 1999 to 2001 he served as a pastoral intern at the First Baptist Church of Manchester-by-the-Sea, Massachusetts.

In 2007, he completed a Ph.D. in Ancient Middle Eastern Languages and Civilizations at the University of Cambridge (England). His 15 research languages include Biblical Greek and Hebrew, Aramaic, Akkadian, Phoenician, Sumerian, Syriac and Ugaritic. Barker is the author of Isaiah’s Kingship Polemic: An Exegetical Study in Isaiah 24–27 (Tübingen: Mohr Siebeck, 2014) and the forthcoming The Eschatological Banquet in the Hebrew Bible, Early Judaism and Christianity (Peabody, MA: Hendrickson, publication anticipated in 2017). He was a contributing author to Zondervan's Archaeological Study Bible, and has also published numerous articles and essays in scholarly journals.

Barker has served as an adjunct professor and visiting scholar at institutions including the University of Cambridge, two liberal arts colleges (Gordon College and Culver-Stockton College in Canton, Missouri), a Franciscan university (Quincy University in Quincy, Illinois), and a theological college in one of the most poverty-stricken regions of India (the Buntain Theological College).

In 2008 he was ordained at Madison Park Christian Church in Quincy, Illinois. From 2010 to 2016, he was the lead pastor at LifePoint Church in Quincy. As its first full-time employee, Barker was a catalyst for the church’s fivefold growth over six years.

Also in 2008, he co-founded Horizons Social Services, a Christian social services agency to help those in need in the Quincy community. The agency currently serves 27,000 hot meals per year. Those who are being fed also receive access to mentoring, weekly Bible studies, job skills training, and a food pantry for their families. “We have seen Christ most at work among the poor, the marginalized, the ill, and the broken,” he says, “and that is why we have sought to follow Jesus into those contexts—from Quincy, Illinois to Kolkata, India.”

Since 2014 he has been a Chaplain in the United States Air Force Reserve. During Barker’s service, his unit was awarded the Nuclear Deterrence Operations Service Medal in recognition of their contributions to national strategic nuclear defense.

Barker’s professional affiliations have included fellowships with the Cambridge Overseas Society and the Center for Pastor Theologians, and memberships in the Evangelical Theological Society, the Institute for Biblical Research, the Society of Biblical Literature, the Society for the Study of the Old Testament, and the St. Catharine’s College Society.

Over the years, his experiences in diverse academic and church settings afforded him not just a familiarity with varying pedagogical methods, but an ability to work comfortably across denominational and cultural lines.

He and his wife, Sara, are parents to three young children.

Barker is enthusiastic about taking the helm of the Center for Faith and Inquiry and the Gordon Honors Program. “Our goal,” he says, “is to educate with a view to ministering to the needs of the world in the name of Jesus Christ. Consequently, we engage the minds and the hearts of students in the classroom and the art studio, on the sports field, in the residence halls, in the Chapel program, and in every other facet of campus life. Beyond these venues, students need experience in international settings and various service contexts to prepare them for the challenges we face. We do this so that students might mature, and, in turn, might effect change in the world as leaders who serve sacrificially, and who advance the Gospel with academic excellence and spiritual vibrancy.”