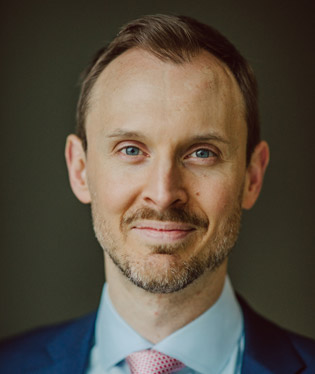 Professor in the Practice of Finance

Alexander Lowry brings an unusual “bilingual” perspective to the academic world, having spent 15 years in senior executive positions in international business and finance.

Alexander joined Gordon from J.P. Morgan Chase. In four and a half years at the bank, he served in senior roles ranging from deputy to the chief operating officer of the U.S. Private Bank to his recent role helping lead the firm’s private foundation. Supporting the deputy director, Alexander led a wide range of management and administrative functions to help direct the firm's global philanthropic investments, giving and investing $240 million annually across 40 countries.

Prior to joining J.P. Morgan Chase, Alexander spent a dozen years with PA Consulting Group, Europe’s leading management consultancy. As a management consultant, Alexander specialized in leading major change and business transformation programs in blue chip organizations. After working in the London headquarters for seven years, Alexander was moved to New York and became co-head of the Americas Project Management Centre of Excellence. While at PA Consulting, Alexander served on the firm’s pension board. He guided the Investment Committee to manage the $750 million portfolio, including evaluating, selecting, and monitoring investment managers.

In addition to his leadership and teaching responsibilities at Gordon, Alexander serves as an Advisor and Board of Directors Member for fintech and financial services companies. He's also a frequent speaker at gatherings of business leaders, corporate events, and academic conferences. His views are often cited in the media, including in the Wall Street Journal, New York Times, Economist, Forbes, Reuters, radio, and the major television networks. Alexander is also the founder and host of the #1 ranked podcast on boards of directors in iTunes: Boardroom Bound.